After hearing about Jerry Sandusky's conviction, I quietly thought, "Yay." Though "yay" is not exactly the best outburst for a crime of his nature, it's what came out. To be honest, my life before kids, I hadn't given much thought to child predators. I grew up with Times Square as the mecca of child prostitutes and drug addicts - danger was pretty clear.

After becoming a parent, however, everything changed. Every corner, every face, every situation became a potential risk factor. And don't say you've never experienced that heart-stopping moment when you've lost view of your kid and thought the worst.

Kids run off - it happens. I am constantly yelling like a mad-woman for the boys to stop running before they reach the end of the block or not to turn the corner or stop running off to prove their manhood.

Until this workshop I attended, I'd been telling the boys about "child predators." I gave them the whole "there are bad people who do bad things to children," speech. But the workshop presented by Yello Dyno, shed some light to the way kids think and why my methods weren't working. Now that one child molester is behind bars, it seemed the best time to share what I learned.

"Tricky people" can be anybody - it's not what they look like, it's what they ask you to do that matters. Never take anything or go anywhere with anybody unless you ask first. I know, I know - easier said then done.

Next I told the boys if we ever get separated they should go to the cashier (if we're in a store) or seek a mother with kids in tow or an officer/security guard.

Notice how the officer is the last resort?

That was in the presentation. But in my opinion, the "mother with kids" sits best with me. No mother would brush off a kid asking for help in finding his or her mommy. Unless that mother is Jacole Prince.

Finally, the boys practiced yelling "Help, this is NOT my mommy/daddy!" at the top of their lungs.

They were a little reluctant at first but they got the hang of it, especially the yelling part. When I told them how in my day, we were told to yell "Fire" to get attention, they said, we'd have better luck screaming "Pickles!!"

Can you picture a woman fighting off her attacker yelling, "Pickles! Help me, Pickles!" 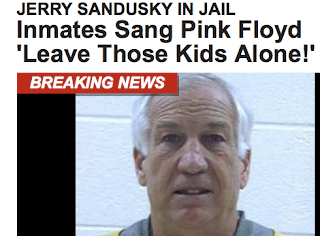 Oh the things kids learn at a Major League ball game. They learn yet another home team chant, they learn the Wave, the "We Are The Champions" clap and they practice yelling on cue. Really loud. Of course, it's easy because they're revved up on french fries, Mountain Dew, a corn dog and cotton candy. How I wish I were kidding - Dad's the best nutritionist.

This was our second trip to Citi Field to see the Mets play. It was against the Orioles and that's about all I remember. You see this time, even though it's only their second, the boys have become a little more comfortable with going to the ball park, as you can see here.

They really got into this time, although they learned nothing about the game. All the rules, the play by play explanations went straight over their heads. Samu gave me the "uh-huh, uh-huh," while he eyed the sweaty vendors selling hot dogs, soda and big foam pointers (which he really wanted because he's the consumer who can't say no). And while he waited eagerly for the Mets to hit a home run, it wasn't because of the score, it was to see the big mechanical apple pop out.

The Mets did win the game. I'd like to say this footage is the After-game glow but alas, it's the Mountain Dew.

There are times my husband gets so fed up with the noise in this house, that he'll say, "I'm not the father, I'm a donor."

And here's your dream beer: 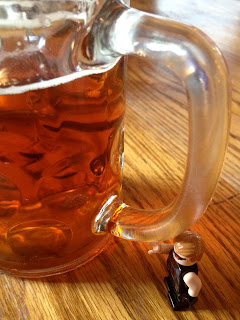 Samu is a consumer. He'll find something to buy no matter what that store sells - including Victoria's Secret. Damn pink dogs. He has no concept of money, like our government, he thinks its just for spending. No wonder our economy is in the state its in.

Maybe that's why our education's Common Core standards incorporated counting money in the math curriculum. I thought it was a little ridiculous having a Kindergartner count pennies, nickels and dimes when they don't even know how to tell time yet. If he ever gets paid by the hour, he's going to be asking for advances every five minutes.

Anyway, my mother had this bright idea of buying him a toy cash register, because like I mentioned, he always finds something to buy.

He can practice counting money! She justified.

In actuality, he didn't count anything. He just played with the plastic coins and little paper bills and didn't put them in their allotted place.

I'm neurotic. It drove me crazy - like folding a map the wrong way - so I suggested playing "Store".

I laid out items and placed a price tag with a sticky note. He played the customer and purchased things, which I transacted and gave him change. He complained when I made him count with me and said it would be better if we switched.

When it was his turn to run the store, he jacked up the prices. Like $85 for a pen and $75 for a pair of scissors.

I purchased the pen (for $85) and gave him five twenties. He put my money to the side and gave me four twenties back - plus - a wad of fives and a few tens and a bunch of singles.

"That's how you run your store?" I asked.

"Yeah! You need money. I give it to you so you can buy more!"

Maybe I should send Obama a proposal?

I don't wear a wedding ring. It's not that I lost it or stopped wearing it, it's not even an act of subconscious denial. I'm just not into rings. Symbolic rings at that. If a person gets confused about my marital status because I'm not wearing a figurative ball and chain, then let him scratch his head - it's usually balding anyway.

It can't be that hard to tell because for the most part, I walk around with a kid or two. That's like a ball and chain and the noose while we're at it. If I'm not sporting the boys around, it hardly matters. I look like a mom. The permanent "mommy's mad" lines on my forehead, the stray gray hair poking out the top of my head - the frizzy mess in a ponytail. And let's not even get into my clothes.

But the past couple of weeks, I've been working at a sales position. Kind of like Avon, only I push printed products so I don't think I can help Edward Scissorhands should I knock on his door accidentally. Unless he shreds stress-reliever balls to relieve his stress.

To clean up my act, I've been washing my face with facial cleanser and not Ajax dish soap with grease cutting action. My work clothes from the days as salon manager have come out from storage - luckily, they were post pregnancy. As for the hair - well, that needs professional execution which costs serious dough - in the meantime, I got a bun and it's not in the oven.

Where does the wedding ring fit into all this?

Well, they way I see it - a sales person can seem as shady as a politician - a wedding ring changes that. Call it a credibility factor - yes, I am loyal. Call it armor - don't mess with me because my husband looks like Mr. Clean. Call it the equivalent of the Red Power Tie - you see I get what I want because I got some fool to marry me, right?

It might sound crazy, but the next time you go to buy a fridge or a car, tell me you don't look for a ring on that finger to decide whether that five percent discount sounds like a deal to you or not.

I guess what I'm saying is, a wedding ring is a sales person's prop. While I don't expect to get better business from it, if I do, don't expect me to call it my precious.

There are a lot of advantages to growing up in the city - when I think of one, I'll share it with you.

Actually, city life exposes you to a variety of social and cultural experiences - from having a choice between Thai to Indian curry to knowing the gangster code name for the police. But wildlife? Not unless you consider a raccoon stealing chicken from your backyard barbecue a National Geographic event.

That's why it was a real treat for the last school trip, when Zuki's second grade class went to the Gantry park to see a touring raptor show called "Birds of Prey." I volunteered to escort citing the dangers of taking the subway with a bunch of second graders - but the truth of it was, I wanted to see a real live eagle.

It was hot. The 7 train was a mess. Together, they were a hot mess. But to see the affect wild animals have on kids was worth it. It's ironic how the call of the wild is the very thing that calms seven year old beasts. Then again, to be told that the falcon was eying a chihuahua earlier probably hit home.

To say the kids were in awe would be an understatement - they've never seen birds like this. Perhaps kids growing up in Texas see seven-foot wing spans on a daily basis, like the one pictured here. Kind of scary, but I'd take this guy over a bunch of filthy pigeons any day.


Of course when Zuki found out that the barn owl is an effective mouse exterminator, he asked if we could have one as a pet. You have to admit, it is a beautiful bird.

Zuki nodded and I figured he understood. "Then can we get a falcon?"